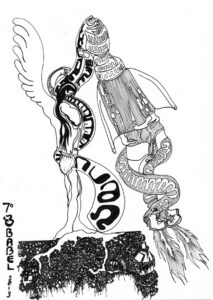 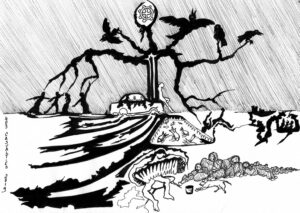 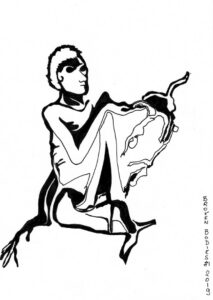 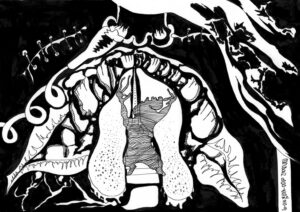 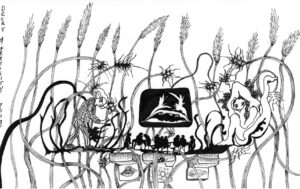 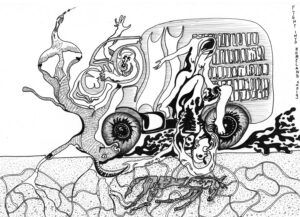 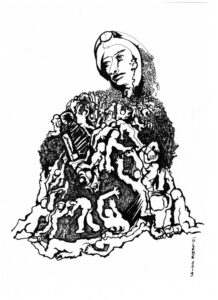 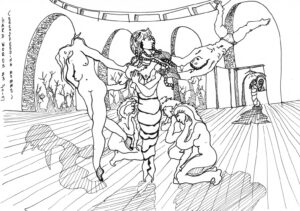 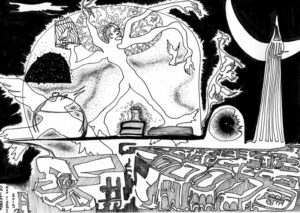 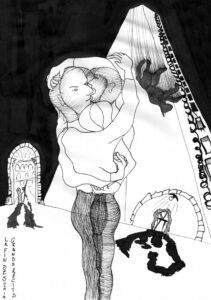 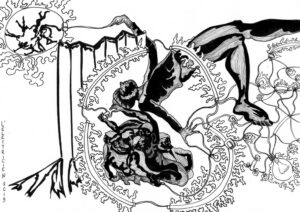 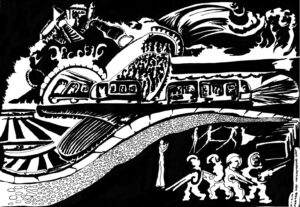 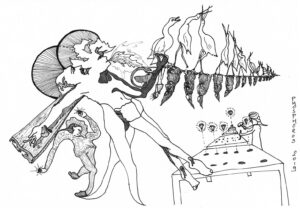 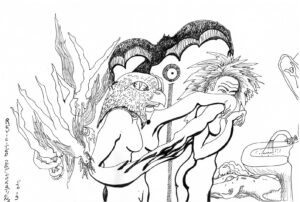 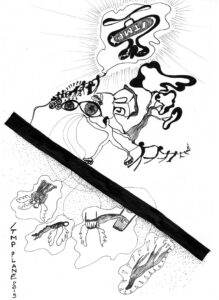 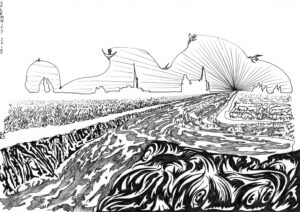 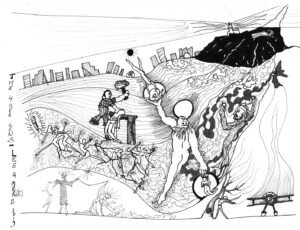 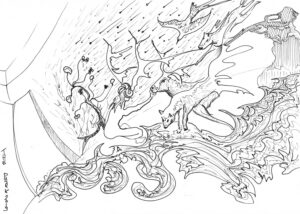 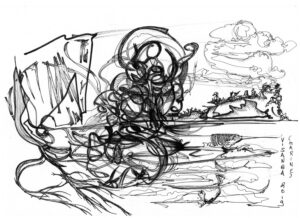 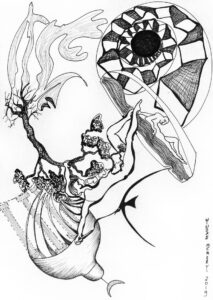 What is our identity at the digital age? Does it have any common feature with parietal art? These four self-portraits are all based on my own fingerprints and reflect on four dramatic life episodes. They connect the digital world and a deep human drive to use hands and fingers as primitive signs of identity, pointers, and tracers. Etymologically digital refers to the finger and has recently drifted towards numbers and electronic data. To the point that contemporary identification procedures tend to associate numbers with identity, fingerprints with signatures, and virtual traces with self-representations.

Using digitized scans of fingerprints as canvas, and following the biological lines and curves to materialize the self-portraits, I have worked like a wood sculptor who obeys the curves and shapes of the wood in his carving. In the same vein as my live digital works where I used cellular automata patterns to guide my imaginary, I have relied on the graphic pulses of my fingerprints to develop four personality traits – related to four senses. The fifth sense is intentionally left as a blank page. Perhaps your own view on it or your own self-portrait might complete my orphan series?

By drawing fingers and hands, it is also a reflection on the art of drawing itself that is at stake. Because the hand has been the first primitive tool to make strokes on sand, earth, and stone, and because the hand is still today the most evolved and uncontroverted tool for creating visual art, should it be made on a computer. Built through hand drawing on a digital version of fingerprints, each piece pursues our ancestral tendencies to draw on our natural environment, should it be the virtual digitized world. By turning my own finger traces into tormented human figures, I revive the old shamanic traditions of connecting pieces of oneself with exogene parts to rebuild a transcendent body.

The self-portrait gallery is a quest for my deep and ambivalent identities. Perceptions through senses always return to the infant’s primitive sensations of touch… so deep that we cannot conceive any memory of its origin. The other senses, taken separately, evoke both extreme strong memories, and affective pulses… that my hand has transmuted into visual traces grounded on my fingerprint identity. 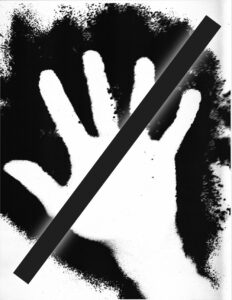 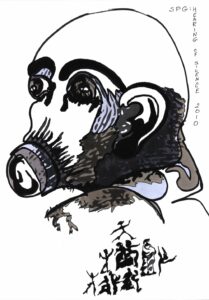 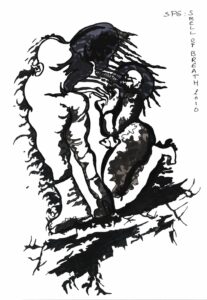 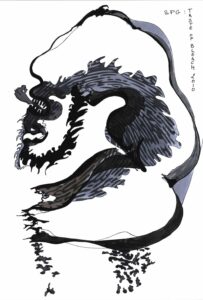 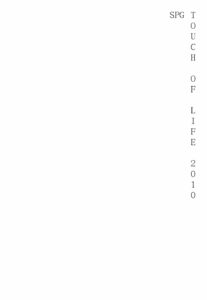 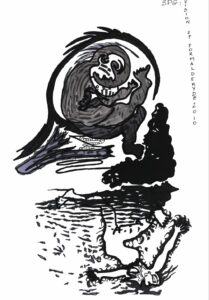 Mary Magdalene is known from the Gospels as the first one to discover the Christ at his tomb after resurrection. But her myth is more complex and intricated with religious (and art) history. Either confused with another Mary, repentant and with ambivalent ointment of Jesus’s feet, thus highlighting a possibly sexual behavior. Or, on the other end of the spectrum, a possible Gospel writer and disciple whose work was deliberately ignored at times of male domination in the Christian religion. Whatever is the truth, her character is highly symbolic for the image and role of women in Christian religions.

Prospero envisions the marriage of his daughter and the return to Milan as an ending of his life. He was the master of ceremonies on the island, he used his power to restore harmony. In Milan he will end in despair, unless prayers can redeem him. However, he will only be the dark shadow of his devil art. Melancholy and dark subconscious are among the main themes in this drawing. It evokes Renaissance engravings on similar moods through water renonculus.

Somewhere on the North outskirts of Paris, at Porte de la Chapelle, stuck between motorways and condominiums, and only 6 kms away from Notre Dame, is one of the most dramatic place in the city. An urban jungle, where migrants who fail to “integrate” end up. Living unsanitary among rubbish and excrement, they only have as resources begging, dealing, or stealing, and they only can dream with crack, alcohol, or memories. I feel so ashamed to live in the vicinity of such a place in which human beings are turned into hopeless ghosts… when money flows for rebuilding Notre Dame. Only a small percentage of this money could help these people to find dignity again and a reason for hope. 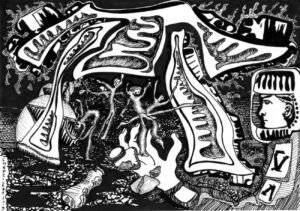 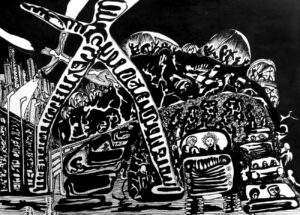 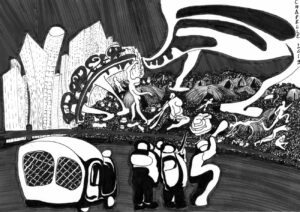 Hagar is the Egyptian servant of Abraham and Sarah, who is given to Abraham so that she can bear a child for the couple. Hagar has been almost considered as an object by Sarah, but she received the promise of a long destiny by the angel of God in her first flight in the desert to escape Sarah’s oppression while being pregnant. She is asked to return. According to Frymer-Kensky, she is the only woman in the Bible to receive a divine promise of seed. In her second meeting with the angel of God in the desert, Hagar is in despair with her son Ishmael because him and her are about to die of thirst. The angel opens her eyes and she can see a spring nearby. Contrary to what is depicted in this drawing, her son is now a teenager, not a baby. The metaphor in the drawing is about the blessing of Hagar against adversity, the support that she receives despite her non Jewish lineage, and the triangular relationship between her, God and her offspring. With respect to contemporary issues, Hagar is identified by feminist as an emblem of women’s suffering in a patriarchal system. She is important in Islam as the mother of Ishmael, and therefrom of the Arab people, and the support given by God despite her outcast status.

Inspired by a wonderful late poem of Mahmoud Darwich who compares the events in his life, from the most dramatic ones to the most common ones, with the throw of dices. What strikes me in this poem is the notion of fate. Are we just the result of random choices? If there is a divinity, why does it let the best as well as the worst happen on earth? If we have a will and an aim in life, what is their power on the control of our life when compared with destiny? What surfaces, and what sinks? Can we counteract destiny and fate, or are we bound to endure?

Pavane for a dead tree

After last summer draught in France, leaves turn brown prematurely, wind breaks branches weakened by the lack of sap, young trees with too shallow roots die. We pass by. Nature has the duty to mourn its corpses. Whether plants communicate or not, whether the death of a tree impacts the well being of others, whether a suffering tree may experience any form of pain, I cannot ignore the harm made to nature by climate change. If nature does not chant for its losses, let us listen to Ravel, and perhaps, also, take strong personal decisions for the planet.

Life’s circus evokes multiple personality that is considered either as a psychic disorder or as a human faculty inherent to every human being, allowing her/him to cope with situations encountered during life. The asexuality of the main character combined with female and male body parts evokes the question of transgenderism and the link between personality and sex. The tenderness and harmony emanating from this character does not describe a dramatic or depressive situation, but rather a festive and choreographic serenity of the recognized and accepted multiplicity. The drawing is entitled “circus of life” perhaps in an unconscious reference to Cirque of Georges Seurat which celebrates the popular circus festivity and its flamboyant side … but also mundane and superficial. One could imagine, in the background, two theater spotlights and rows of seats on which there are spectators. The dance pose of the characters also suggests the presence of a musical source that supports the choreography.

But … the vanity and superficiality of the scene becomes more obvious (and cruel) if we reinterpret the background image as that of a skull, seen from inside, with empty eye orbits and double rows of teeth. In the same spirit as Gauguin in L’esprit des morts, we are in presence of the association of a living and young form with the constant and permanent threat of the finitude of life hidden in the shade. Finally, this drawing combines the intoxicating oceanic sensation of a dancer in union with the music and the multiplicity of emotions that it evokes, but also the ecstatic sensation of death with absolute control and abandonment. (Gordon Rosemary, « La pulsion de mort et ses rapports avec le soi », Cahiers jungiens de psychanalyse, 2003/2 (n° 107), p. 67-84.)

This work is representative of several drawings that deal with existential or spiritual themes, often related to the afterlife, or sacrifice. It also takes up the theme of the androgynous, sometimes represented as an angel, as an ambivalent person, both separated and union of multiples, some kind of universal human being.